Framed by the dull, beige airplane window, my first glimpse of the majestic Mayon Volcano, basking in her mighty glory against the clear blue sky,  left me misty-eyed. My mind  had flashed to a memory from 1st Grade, of me painstakingly coloring a textbook illustration of Mount Mayon, trying but failing to stay in the lines.  To a child in the late 1970s, the prospect of travelling to Legazpi to marvel at the volcano renowned for having the “world’s most perfect cone” seemed daunting and unattainable. It had taken me nearly four decades to set eyes on the real deal, and I can truly say my 1st Grade social studies textbook was not exaggerating. 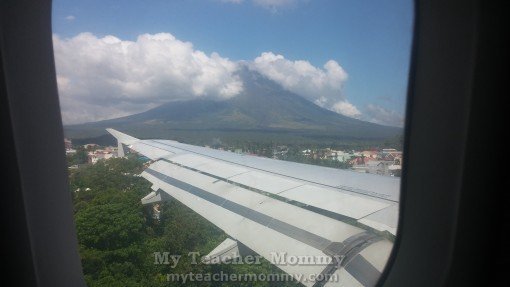 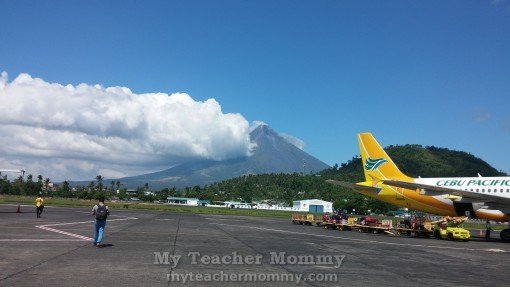 Named after Daragang Magayon (“beautiful maiden”), the heroine of a beloved legend from Albay, the jewel in Bicolandia’s tourism crown stands proud and forbidding, yet irresistibly alluring. You’d want to take a closer look, but you’re aware of the death and destruction the seismically active volcano has wrought on the locals for centuries. Local folklore has it that only those with pure intentions are rewarded the privilege of beholding the imposing Mayon Volcano unobstructed by clouds. My son and I found out how elusive a full glimpse of the mysterious volcano could be: In the three days we were in Legazpi City, Mayon Volcano revealed herself completely only on the day we landed. I clicked as many pictures as I could while on the tarmac, before being politely asked to move on by the Cebu Pacific crew. 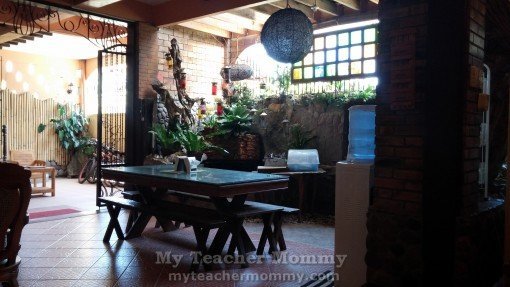 A quick, P35 tricycle ride took us from the airport to Balai Tinay Guesthouse, where we were booked for two nights. I am generally wary of homestays but our pleasant experience at Balai Tinay has made me reconsider my aversion towards bed-and-breakfast accommodations. For 1250 a night,  guests get a room, toiletries, wifi, and a filling breakfast. Balai Tinay was spic and span and looked after by staff who were friendly and helpful without being pushy. The place was a three-minute walk to a major thoroughfare, Rizal Avenue, where one can hail a jeepney or tricycle to any part of Legazpi or as far as Daraga.

My son came down with a fever in the afternoon of our arrival, so we had to push back our Legazpi City sightseeing for the next day. It was just our luck that Mayon Volcano would coyly hide behind thick, grey clouds on the day we were ready to explore Legazpi City. Nonetheless, we pressed on, hiring a tricycle to ferry us to major tourist sports in Legazpi and Daraga, Albay. 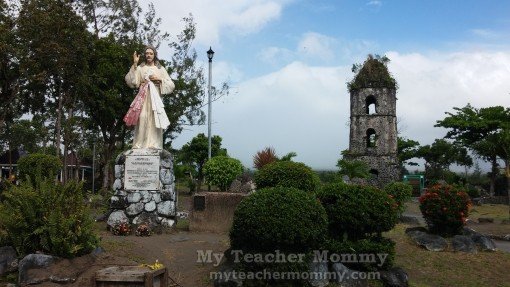 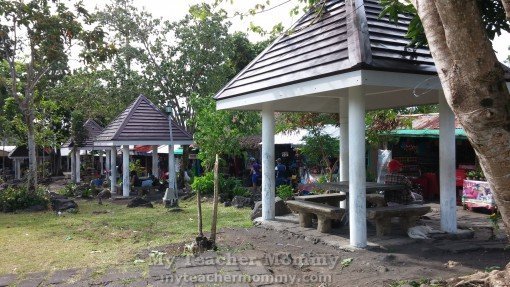 Our first stop was the Cagsawa Ruins Park, where visitors will see the remnants of an 18th-century Franciscan church that was buried by the 1814 eruption of Mayon. At the park we posed for “special effects” photos in front of the Cagsawa church belfry and sampled a cup of sili-flavored ice cream procured from one of the souvenir shops in the area. What can I say about the hot and spicy ice cream? Well, it’s an acquired taste, but every one should try it for the novelty alone. Picnic tables and chairs are available if you ever feel like having some snacks there. Expect to be approached by people touting all-terrain vehicle (ATV) tours that promise to take you as far as halfway up Mayon. Your Brother Travel and Tours and Bicol Adventure ATV are highly recommended by those who have tried this adventure. 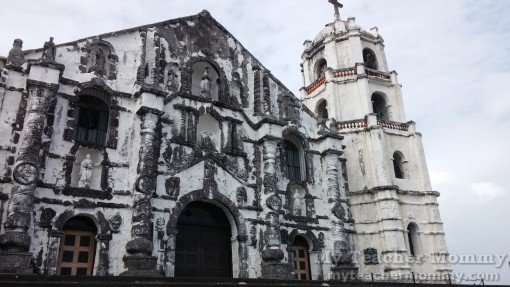 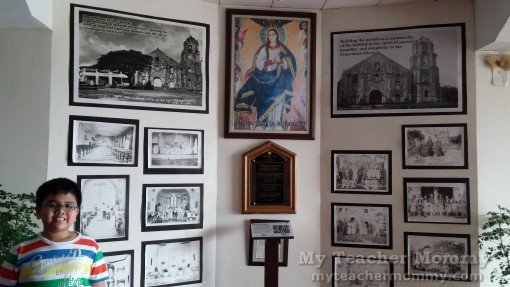 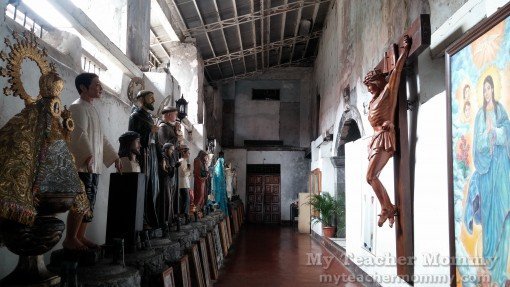 Next, we proceeded to the Nuestra Señora de la Porteria (Our Lady of the Gate) Parish Church, more popularly known as the Daraga Church.  Nestled on top of a hill, the 243-year-old stone church overlooks Mayon Volcano and the Cagsawa ruins. Declared as National Cultural Treasure by the National Museum of the Philippines, the church has been whitewashed with lime to protect against further deterioration. Inside are religious statues, artwork, and black-and-white photographs tracing the history of the church. 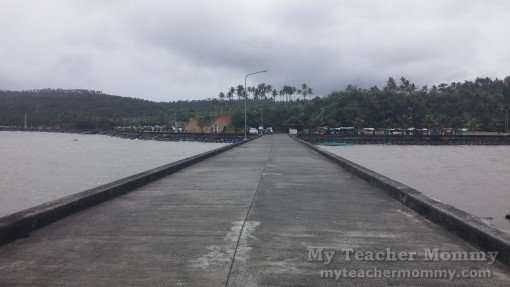 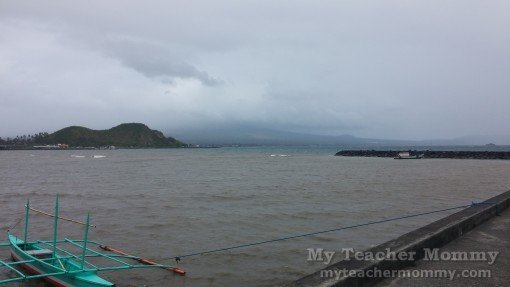 Afterwards we rode to the Legazpi Port Breakwater to watch the tides of Paliqui Bay ebb and flow into the Albay Gulf.  Gusty winds and grey clouds portended rain, but Motito and I stayed right where we were, grateful for the cool breeze blowing from the gulf. Earlier in the day, Motito had enthused about the cool weather in Legazpi and exclaimed how it would be awesome to live there. I shared his sentiments, mostly because Legazpi represents a balanced mix of the modern and the traditional. It is a compact city, easy to get around, and boasts the conveniences of a highly urbanized city without the scourges of one. 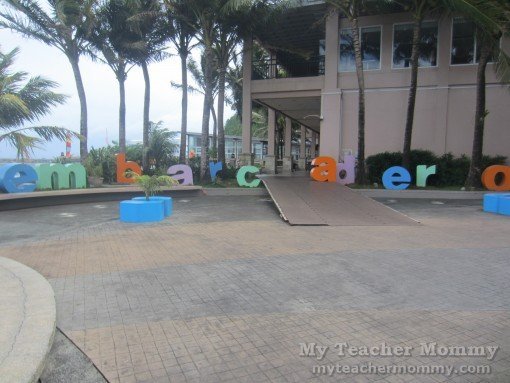 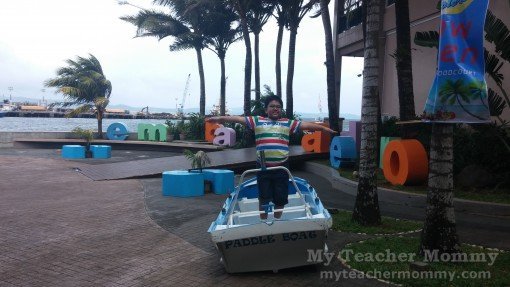 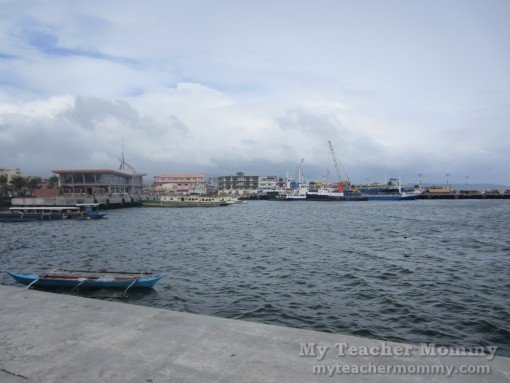 Next we  made our way to the Embarcadero de Legazpi, Albay’s answer to Manila’s Baywalk. As we had come at half past 12, I was expecting the bayfront restaurants to be bustling with lunchgoers. Instead the place looked rather drab and dreary. The only people there were me, my son and the shop employees waiting for customers to serve. On a clear day, the Embarcadero offers a panoramic vista of Mayon Volcano right across the bay, but Daragang Magayon was still hiding behind the clouds on this blustery afternoon. I can imagine Embarcadero coming to life in the evening, when the moon casts a luminous reflection on the waters, as diners chat excitedly over crowded tables and lovers stroll on the moonlit promenade.

It was 1PM when we reached Pacific Mall. I was still up for more sightseeing, but it was past my son’s lunchtime so I paid the tricycle driver P600 and sent him on his way. With lunch finished, we caught a tricycle to take us back to the guesthouse.  Our flight back to Manila would be leaving at noon tomorrow, which left me just enough time to shop for souvenirs in the morning. We had to skip a few notable attractions in Legazpi City, like Ligñon Hill and the Albay Wildlife Park, but we did get what we’d come here for: an unforgettable first glimpse of Mayon Volcano. 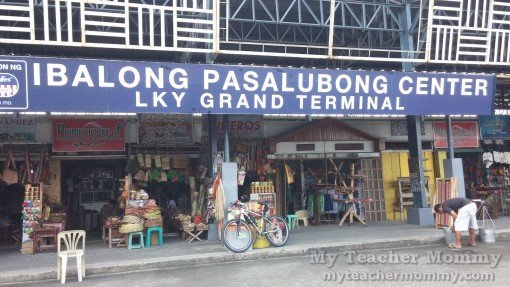 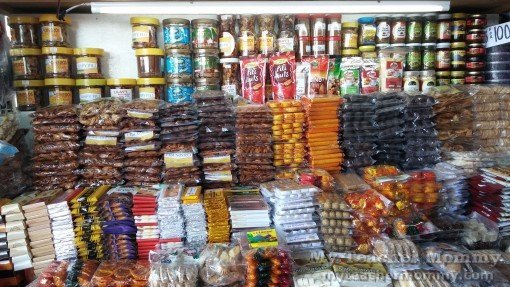 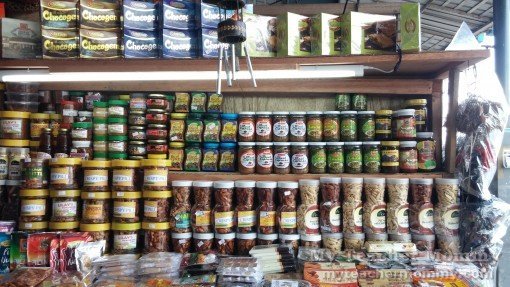 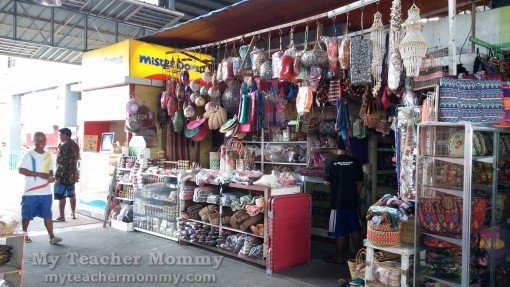 Where there’s a transport terminal there’s bound to be a slew of shops selling souvenirs, and Legazpi City’s Grand Central Terminal has got to have the biggest selection of goods that one can take to family and friends back home. There are bottled Bicol express and laing, refrigerator magnets shaped like a chili pepper,  butanding (whale shark) graphic tees, sundry handicrafts made of abaca, and the quintessentially Bicolano delicacy, pili nuts, in jars big and small. As I flitted from shop to shop, I couldn’t help but admire how clean and organized the Legazpi Grand Central Terminal was. Buses going to all points of Bicol, as well as those bound for Manila, were neatly parked in their respective bays.  UV Express vehicles and vans going to Donsol, and jeepneys and tricycles for nearby destinations, round out the transport options available to travelers wishing to explore beyond Legazpi. 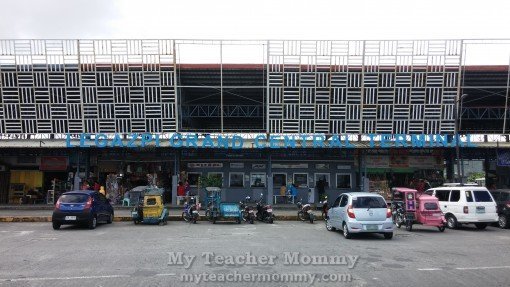 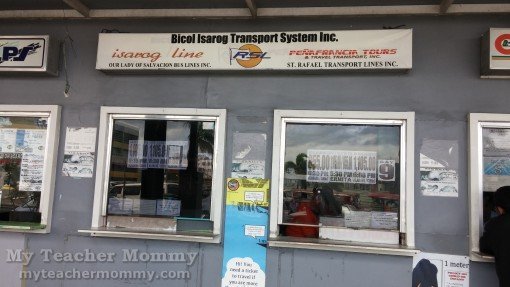 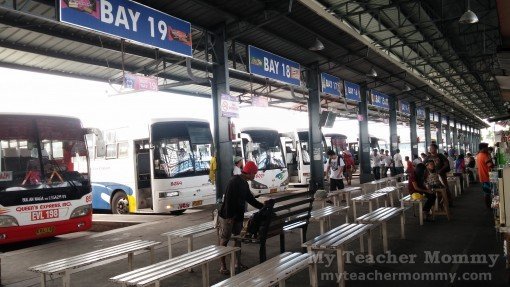 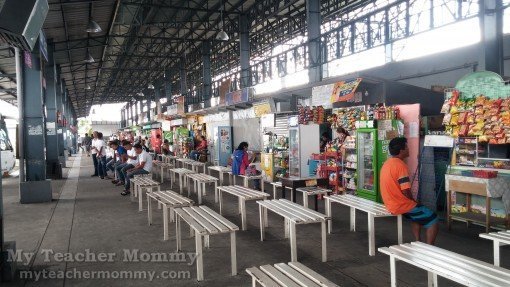 Loaded with two bags of all kinds of candied pili treats, my son and I were now homeward bound. I had fallen for Legazpi so much that I was missing it already.  I can’t wait to go back, perhaps when my son is old enough to swim with the whale sharks.