I nearly got lost when my mother took me to Luneta to hear Pope John Paul II say Mass on February 1981. I joined the unprecedented crowd that thronged the same venue to witness the same Pope celebrate the World Youth Day Mass 14 years later. I was almost certain that I would not miss Pope Francis at the Rizal Park Mass on January 18th, until the rains came. The spirit was willing but my love for the Pope, it turned out, was not water-proof. My son despises long walks and gets uncomfortable in crowded places. That meant plodding five kilometers on foot through the rain-soaked soaked streets of Manila to stand cheek-by-jowl with some six million other raincoat-clad bodies for close to two hours was out of the question. Dejected that I was unable to take my son to his first Papal experience the way mother did for me 34 years ago, I took a deep sigh and turned on the television. At home we were warm, dry, and very comfortable. Dear son sat through the first half-hour of the Mass before shifting his attention to the Minecraft world he had been building for days. 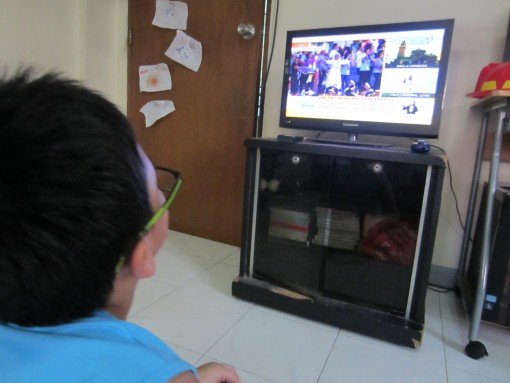 My son’s father is non-Catholic and we have agreed to raise the boy in a manner that does not adhere to a specific religious tradition. Motito goes to a secular school where Religion is taught as a subject starting from the fifth grade. My boy’s lack of interest in the Papal visit notwithstanding, I thought I’d at least make the most of the long Papal weekend and seize the teachable moment that was staring me in the face. So I drew up a quick unit study of sorts for my son, who is in second grade, about Pope Francis’s visit to the Philippines.

My Teacher Mommy’s Unit Study on the 2015 Papal Visit to the Philippines
Grade Level: 2

1. Archbishop – A bishop of the highest rank who is in charge of churches or other bishops in a large area
Cardinal Luis Antonio Tagle is the Archbishop of Manila.

2. Compassion – The feeling of wanting to help someone who is sick, hugry, in trouble, etc.
He showed compassion for the needy by donating rice and canned goods to the local shelter.

3. Diocese – A group of churches or district that is under the supervision of a bishop
Pope Francis presented the diocese of Palo, Leyte, with a mosaic of the Madonna del Popolo.

4. Eucharist – The sacrament of the Holy Communion
The priest explained the importance of the Holy Eucharist to a group of Grade 2 students who were about to
receive their First Communion.

5. Jesuit – A member of the Society of Jesus, a Roman Catholic Order of religious men founded by St. Ignatius of
Loyola
Xavier School and Ateneo de Manila University are two of the most prominent educational institutions founded by
Jesuits in the Philippines.

6. Motorcade – A procession or parade of vehicles, typically carrying or escorting a prominent person
Hundreds of Filipinos lined the entire stretch of Roxas Boulevard hoping to catch a glimpse of Pope Francis on
his motorcade.

7. Nunciature – A papal diplomatic mission, equivalent to an embassy
During his visit to the Philippines, Pope Francis stayed at the Apostolic Nunciature on Taft Avenue, Manila.

8. Pope – The highest leader of the Roman Catholic Church.
Pope Francis is the first Jesuit pope and the first pope from the Americas

9. Psalm – A song or poem used in worship and especially one from the Bible
Yolanda survivor Eric De Leon sang the Responsorial Psalm in Waray during the Holy Mass in Tacloban.

10. Zucchetto – A small, round skullcap worn by Roman Catholic clerics
A strong gust of wind blew away Pope Francis’s skullcap as he disembarked from his plane on his first landing in
the Philippines.

Science – Pope Francis’s primary reason for visiting the Philippines was to console the victims of Typhoon Yolanda, which killed more than 6,000 people and left tens of thousands more homeless in November 2013. A total of eight or nine typhoons or tropical storms make landfall in the Philippines every year. Meteorologists can tell if a typhoon is coming by observing the sky and studying weather data. You have learned how clouds can indicate what kind of weather we are likely to experience in the day. Pretend that you are meteorologist. Look at the clouds in the sky. Predict what kind of weather we will have today. Explain your observation by way of a weather report.

GMRC/Values Education – Mercy and compassion are the central themes of Pope Francis’s message to the people of the Philippines. The Pope urges Filipinos to love and care for the poor. He calls on us to learn how to cry for the poor and to show love not just by giving to the poor but also receiving from them. Pope Francis demonstrates his own mercy and compassion for the poor, the sick, disabled, and the elderly by visiting them, giving them his blessings and praying for them. As a child, you can show mercy and compassion for the less privileged by donating your old toys, clothes and books. You can also participate in your school’s outreach programs and visits to charitable institutions. Make a drawing that illustrates how you intend to show your love and care for our less fortunate brothers and sisters.