Boba Fett plushie quest at Timezone: A lesson in perseverance (and luck) 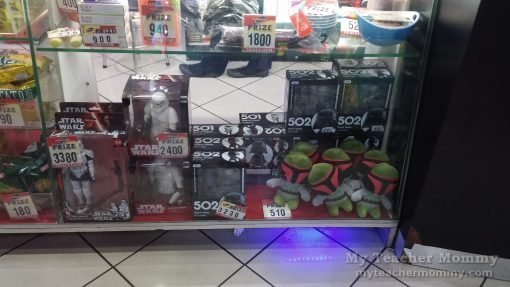 The boy spotted him across a crowded video game arcade. His head was disproportionately bigger than his body, but not in a creepy kind of way. His stitched limbs hinted that they were soft to the touch. One had to guess what his face looked like; he wore a permanent helmet. He yearned to break free of his glass encasement, while his outstretched arms longed for someone to hold. That someone, the boy decided, would be me. The boy turned to his mother, who braced herself for what was coming. “Can we take him home, please?” The boy’s mother regarded the latest object of his son’s desire with equal parts incredulity and despair, before blurting out: “510 tickets for a Boba Fett plushie? How the hell are we going to accumulate 510 tickets!?” 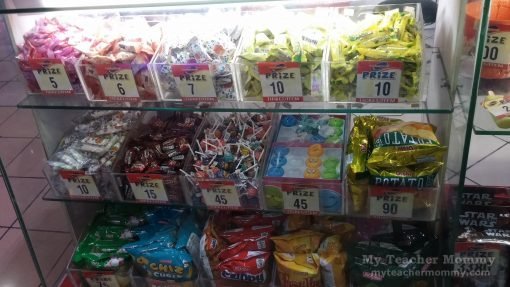 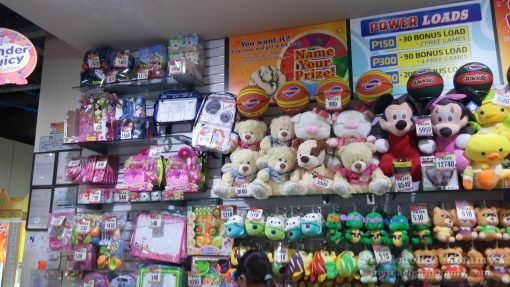 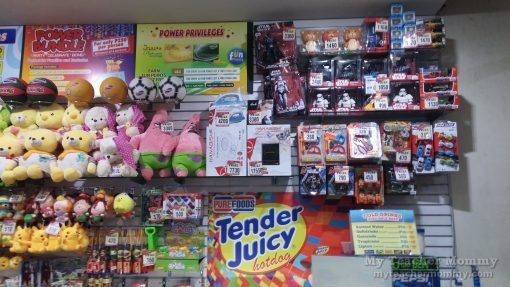 We were standing before the gallery of prizes at the Timezone arcade in Waltermart, Makati, where a showcase of loot beckoned. There were candies, potato and corn chips, erasers, pencils, keychains, teddy bears, coin banks, plush animals, and the odd cheap electronics that cost a tractor-wheel-size roll of tickets. The Boba Fett plushie fetched a cool 510 tickets. Doing the math, I reckoned that at P12 per play at any of the ticket-spouting games and averaging 7 tickets at a time, it would cost approximately P874 pesos to amass the tickets we needed to claim Boba Fett. We were better off procuring the plushie from Divisoria, where it probably commanded less than the price of a tall Macchiato. Dismissing my proposal as a lazy shortcut, Motito insisted that we win Boba Fett “the right way”, at the arcade. “We might hit the jackpot,” he assured me. 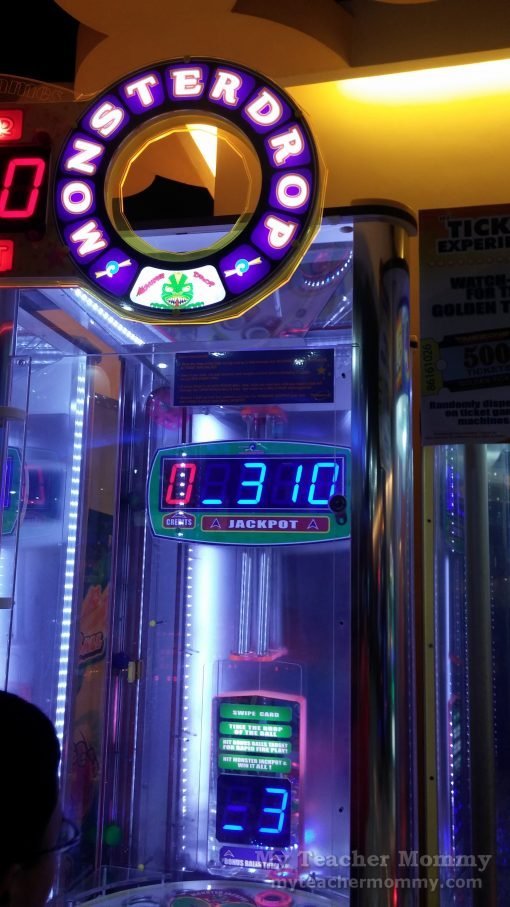 Then I realized something. My calculation had not factored in the element of serendipity. The play-for-tickets-only machines, whose normal ticket output was anywhere between 2 to 12 tickets per play, offered the chance of winning a bonus or jackpot, which promised anywhere from 300 to 1000 tickets. And there’s another thing my estimation had failed to consider: the steely determination of a boy who was on a mission to take home a coveted toy. Easy for him to be optimistic; his mission was being bankrolled by Mommy. 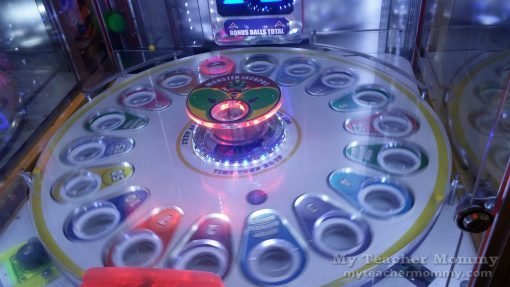 Resignedly, I swiped our TimeZone Power Play card on the Monster Drop ball-drop machine. Twelve pesos were deducted from the card’s balance. Motito pressed the play button, then a rubber ball the size of a golf ball dropped from a tube and bounced off the spinning disc with holes, each labeled with a corresponding number of tickets. The bigger holes gave fewer tickets, while the smaller holes, owing to the difficulty of making the ball fall into them, rewarded the player with more tickets. 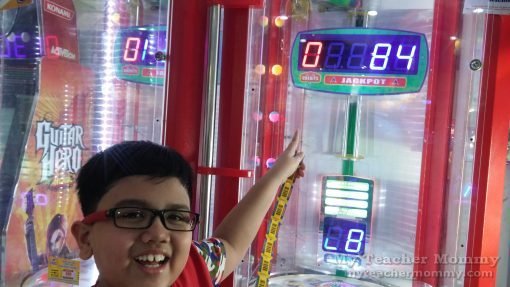 Our first attempt yielded 10 tickets, which was neither encouraging nor defeating. I swiped our card again, allowing the machine to rob us of another 12 pesos. We were rewarded with 2 tickets for our effort. This went on for about 20 more attempts, with the machine spitting tickets in a way that made me accept this wasn’t our lucky day. Elsewhere in the arcade, whoops of jubilation would erupt from time to time, leaving me to gaze with envy at the jackpot-winners as they struggled to keep mile-long spools of tickets from tangling. I looked at my son, who seemed oblivious to other people’s successful moments. He operated on the principle that there was enough good luck to go around. 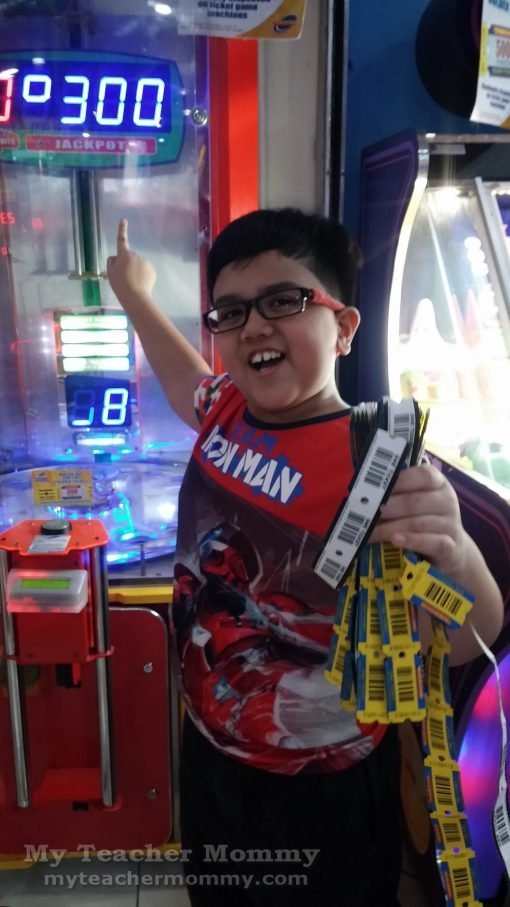 We were down to our last 30 pesos on the card, and we had an appointment to keep.  I gave notice that he had two more attempts on the Monster Drop. The penultimate play yielded 7 tickets. Well, that’s that, I thought. One more play and we were outta there.  I wasn’t even looking when Motito’s final ball fell straight into the jackpot hole.  “Jackpot!,” he squealed in delight. “I hit the jackpot, Mommy!” Well, whadd’ya know–and just when I had thrown in the towel! The jackpot ticket counter, which started at 350, counted backwards as the machine churned out ticket after ticket. By the end of it, we had accumulated 582 tickets after using up a 300-peso game credit. 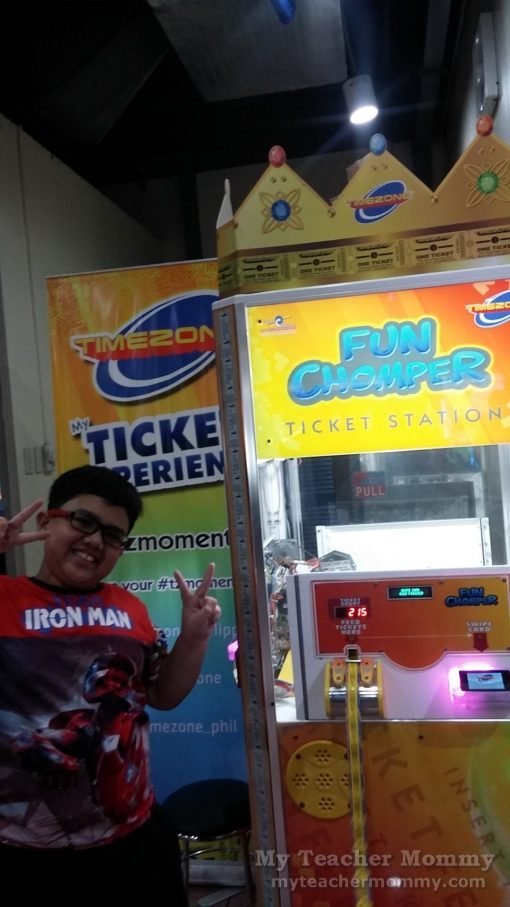 While I adhere to the principle that hard work and determination are key ingredients to success, I can’t deny that luck (or chance or serendipity) plays a significant role.  For instance, some people are born into wealthy, business-owning families, while others grow up in poverty and squalor. Whether we are born rich or poor is completely based on luck, and we did nothing to earn or deserve it. Even self-made success stories that extol the virtue of hard work and perseverance do not discount the serendipity factor.  The ability to recognize opportunities and seize them, coupled with using one’s skills and talents to achieve one’s goals, all work together to enable success. If Bill Gates or Mark Zuckerberg hadn’t burned the midnight oil, forgoing food and sleep while coding Windows or Facebook, they wouldn’t be the inspiring game-changers they are today. It helped that Gates and Zuckerberg’s inventions came at the time when the world needed them. Better still,  they were able to create a need for them.  Going back to my son’s ball-drop jackpot moment, I see the power of the hard work-luck combination. When asked how he did it, Motito explained that he had been keeping tabs on the time between when the button is pressed and when the ball drops. His previous attempts had allowed him to study the ball-drop pattern and improve his timing. He got lucky all right, but only after numerous tries and improving his play every time. 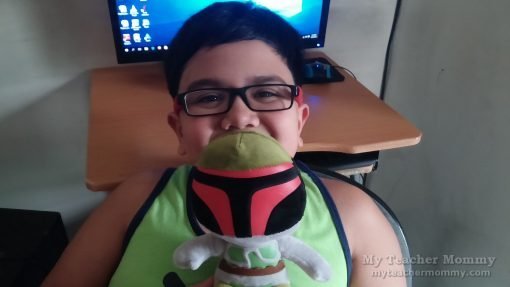 A boy and his Boba Fett plushie

Boba Fett came home with us that day. Motito talked excitedly to him on the taxi ride home.  He slept with the plushie next to him that night and on subsequent nights. My son has vowed to take Boba with him wherever he goes. Or, I surmise, until the next new favorite toy comes along.