From the safety of my father-in-law’s concrete bungalow, I watched impassively as Cyclone Vardah ripped through Chennai on December 12, 2016, causing trees to sway precariously and tree branches to snap like matchsticks. Packing winds up to 120kph, the powerful howler uprooted thousands of trees and downed countless electric posts, plunging the south Indian city into darkness and suspending operations at Anna International Airport. As soon as the cyclone passed, residents in my father-in-law’s suburb immediately started clearing the roads of broken tree branches and clumps of leaves. Clearing the fallen trees would have to wait until the morning, because it had gotten dark and the massive trunks would need special equipment to move. It’s a sight that hit so close to home, the Philippines, to be literal and specific, which is no stranger to the destructive forces of nature, like typhoons, earthquakes, and volcanic eruptions. The extent of the damage wrought by Cyclone Vardah would be known in the next couple of days. The loss of lives and damage to property were truly tragic, but the people I’ve spoken to were grateful that the city was spared a repeat of the unprecedented inundation that brought life in Chennai to a complete standstill for days in December 2015. I tried to commiserate by sharing the Filipinos’ own tales of woe during the Ondoy floods brought on by Typhoon Ketsana in 2009. And if that wasn’t enough, I was going to bring up 2013’s super typhoon Yolanda (Haiyan), which claimed 10,000 lives and left thousands of families homeless. Fortunately, we didn’t need to engage in a grisly game of catastrophic one-upmanship. The Philippines and Chennai, my native home and adoptive home, respectively, share not only a rotten luck in the weather lottery but also a resilient spirit that refuses to yield in the face of adversity. We felt each other’s pain, and nothing further needed to be said. 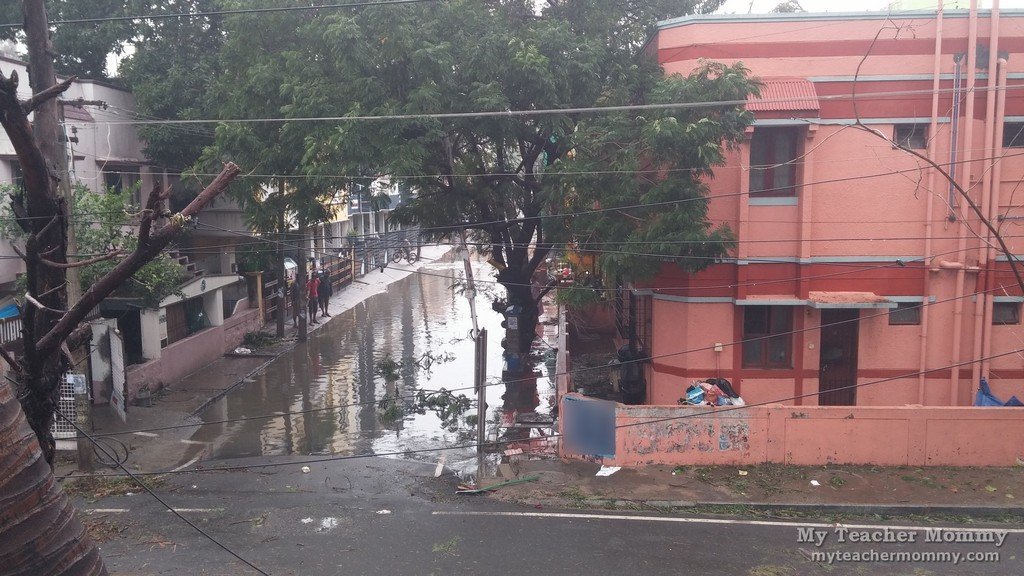 And so we gritted our teeth through five days without electricity, spotty mobile connection, and blocked roads, thankful that every one of our nears and dears was safe and sound. My 10-year-old son, a true child of the digital oughties, was uncharacteristically patient throughout the ordeal. He didn’t incessantly ask me about when the power was going be restored, as I had feared. Motito contentedly waited the minor inconveniences out, amusing himself with books and Legos. When Typhoon Nina (Nock-Ten) barrelled through southern Luzon on Christmas Day, I beseeched the universe to keep human casualties to a minimum. Nina claimed six lives, and sent nearly 400,000 people to evacuation centers. The hard-won lessons from tempests past have led to significant improvements in rescue and rehabilitation operations. Two days after Nina cut a swath of devastation in the Bicol region, life limped back to normal in hard-hit Naga City. People went about their usual business, shops re-opened, and downtown areas saw normal traffic.  Driven by a strong community spirit and collective resilience, the people of Bicol (and the Philippines and Chennai, in general) are survivors. There might be times when we would be down for the count, but we won’t be throwing in the towel, yet. We rise with the sun, and with it, a new hope that tomorrow brings.