Teaching Handwriting: Why It Makes Sense to Teach Cursive First

My son, Motito, suffers from a bad case of chicken-scratch handwriting. His spelling is spot-on, but many of his letters are poorly formed, words are unevenly sized and run too close together, lines are routinely trespassed, and erasures a-plenty. In school, he struggles to finish any seat work that requires a lot of handwriting or copying from the blackboard. At home he would rather do sheet after sheet of math drills if it spared him from handwriting exercises. He has been coasting on the minimal writing that is asked of second-graders, i.e. quizzes are answered on printed sheets, and textbook exercises call for circling, underlining, or supplying short answers. His terrible penmanship has not affected his grades yet, but I worry about his ability to cope in the upper elementary levels, where fluency, speed and ease become imperative for copying long notes or taking dictation from the teacher. 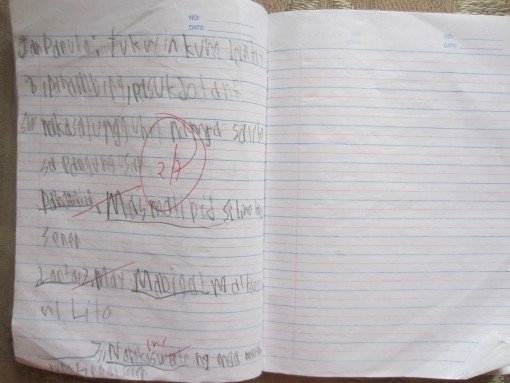 When he moves up to third grade, he will be transitioning to cursive writing as per the curriculum. To prepare him for the change, I started researching online for tips on handwriting instruction. That’s when I came across many articles extolling the benefits of teaching cursive handwriting first. The more I read about cursive writing, the more convinced I became that cursive should be taught at the beginning, before printing or manuscript, instead of the other way around. Teaching cursive first offers the following advantages:

1. Cursive writing reduces the likelihood of letter reversals
In manuscript writing, the pencil is picked up and replaced on the paper for every letter. Some lower case letters begin on the baseline, while others start from the midline, and the rest from the top. This creates substantial room for error when deciding where to begin the next stroke or which direction the stroke should take. This may sometimes result in reversal of ‘b,”d,’ ‘p,’ and ‘q.’ In cursive, all lower case letters begin on the baseline, so there is no confusion on where to place the pencil, and there is a fluid, unbroken flow from one stroke to the next.

2. Cursive teaches proper spacing between words
Improper spacing is a common problem in manuscript writing. Sometimes there is little-to-no space between words, or huge gaps exist between letters where there should be none. Cursive practically eliminates this problem because there is a clear and natural division between words. In cursive each letter is connected to the next, and this flow is only interrupted to allow space between the words.

3. Students never have to unlearn cursive when it is taught first, as opposed to learning manuscript first, then shifting to cursive later.
The pencil grip for manuscript writing is markedly different from one that is used for cursive. Many times when learning cursive, the student will persist in using the vertical hold suited for manuscript, thereby adding to the frustration of learning to write in a different way. Teaching manuscript first negates the work that children put into learning a writing style that will have to be abandoned later in favor of cursive. Can you imagine learning to do arithmetic in Roman numerals for three or four years, only to do it all over again later with Arabic numerals? That is how some cursive-first advocates describe the skewed logic of teaching manuscript ahead of cursive. Some adults who never transition well often develop a penmanship that is a confused mishmash of manuscript and cursive (I confess that my own handwriting has suffered the same fate).

Have you seen the scrawls and doodles of very young children who have not yet learned to write? Notice that they are mostly loops and curves that go up, down and around, suggesting that the writing instrument hardly left the paper. Young children scribble this way because it is less fine-motor skills intensive than drawing a stroke, lifting the pencil, and replacing the pencil on the paper to create another stroke. Many experts are now claiming that cursive writing is easier for children to learn because it is more developmentally appropriate than manuscript.

5. Cursive is faster and more suited for long note-taking and/or dictation

As students progress in the upper elementary grades they will be doing more writing, copying and taking down notes or dictation, and writing essays. Cursive is generally regarded as the faster way to write than manuscript. Greater writing speed frees the working memory, allowing the hand to catch up with thought, thereby encouraging the student to concentrate on content and composition.

While the ship has sailed for my son to learn cursive first, it is not too late for him to start practicing cursive now. We have the last quarter of the current academic year and the whole of summer to work on his penmanship, and I remain hopeful that this should give us ample time to get him ready for third grade.